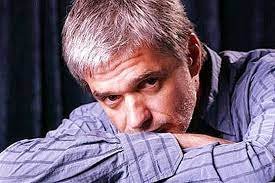 Born April 20, 1961. Father worked at a factory, mother worked in a book publishing house. There is an older sister Olga.
On the initiative of his sister, he began to study with her in the theatrical circle of the Rostselmash Palace of Culture, which was led by Galina Ivanovna Zhigunova, mother of the actor Sergei Zhigunov. The artist himself remembered the play about the civil war based on the play by Mikhail Svetlov “Twenty Years Later”. In addition to the theater, he was fond of sports (played football and was seriously engaged in boxing) and learned to play the accordion and button accordion. After leaving school, he decided to go to Moscow and enter a theater university. Great help and support was provided by Galina Ivanovna Zhigunova, who took him for a show to the famous theater teacher Lyudmila Stavskaya, who said that the boy was good, but too young. The first attempt at admission was unsuccessful.

After returning to his hometown, he entered the theater department of the Rostov School of Arts. After studying for a year, he was called up for military service, which he served in the song and dance ensemble of the North Caucasus Military District.
In 1981, after demobilization, he again went to Moscow and entered the Moscow Art Theater School (course of A.A. Popov), from which he graduated in 1985.

After graduating from the Studio School, he worked for about a year at the Satyricon Theater, which, by his own admission, he got into because of his ability to play the button accordion – the theater needed a person with such skills for one of the performances. Thanks to a chance acquaintance with Vladimir Mirzoyev, he got a role in his production of “Festive Day”, which Mirzoev staged for the small stage of “Why is Max mute in Max and Ruby“. Mark Zakharov liked the performance so much that he let it onto the big stage. Thus, Lavronenko played for Lenkom for almost a year. Later he joined the creative workshop of Mirzoev at the STD, where he participated with interest in many innovative productions. Before leaving for Canada in 1989, Mirzoev handed over his troupe to Vladimir Klimenko, known in theater circles as Klim. Lavronenko worked with the Klim Workshop troupe for seven years, went on tour to Germany, Belgium.

He estimates his work during these years as very interesting, but almost penniless, which was one of the reasons for the actor’s departure from the theater. For some time he was engaged in a private driver. After that he worked as a merchandiser and a driver in a company that sells dairy products. For some time, at the invitation of a classmate, he was engaged in the restaurant business – he was deputy director, and later director of a restaurant at the Moscow Art Theater named after Gorky.

The relationship with the cinema during this period of time also did not develop in the best way. Having made his film debut in 1984, while still a student at the Studio School, in the melodrama “Still love, still hope” (directed by N. Lyrchikov), in the 1990s, like many other actors, remained almost unclaimed, which was additional an incentive to leave the profession.
The turning point was 2003, when director Andrei Zvyagintsev contacted him, who saw Konstantin in one of the productions of Klim’s Workshop in 1991 and approved him, after numerous castings, for the main role in the film The Return. The film has collected an incredible number of prizes at various international film festivals. Konstantin Lavronenko received a prize for Best Actor at the IFF in the Spanish city of Gijon, as well as proposals for further work in cinema. It should be noted that cooperation with Andrei Zvyagintsev turned out to be happy for the actor. In 2007, for his role in Zvyagintsev’s film “Asmongold Girlfriend“, Lavronenko received a prize in the “Best Actor” nomination at the Cannes Film Festival.

Currently, Konstantin Lavronenko is one of the most demanded actors: in 2013, several films with his participation are in production at once: the
series “Farewell, my love!” (directed by A. Zvantsova, role – Vladimir Sotnikov), Three Musketeers (directed by S. Zhigunov, role – Nerzog Buckingham), “The Price of Life” (directed by V. Ostrovsky) and the film “Territory” (directed by A . Melnik, main role – Ilya Nikolaevich Chinkov).

Wife – Lydia Petrakova, actress (met at the Satyricon Theater, where both worked then, got married in 1987)
Daughter – Ksenia (1990), graduated from the Faculty of International Journalism of MGIMO.

Looking to Tie the Knot Soon? Here’s How to Prepare for Marriage

WHAT IS THE EFFECTIVENESS OF BEAR SPRAY?

Winterizing Your Backyard and Patio

Top 5 New Movie Releases That Will Be Blockbusters